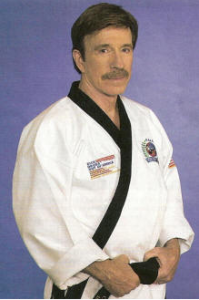 After a year of training for 5 hours daily, Master Shin told him he was ready to test for black belt in Seoul. Grandmaster Hwang Kee presided at the testing. Although he did not pass his test that day, he did pass three months later. Upon returning to the U.S., he continued to train on his own as there were no Tang Soo Do schools at that time. When others on the base showed an interest in his Tang Soo Do practice, he began a karate club on the base. He was 21 years old at the time. After his discharge in 1962, he opened a school in Torrance, California with his brother Aaron who was also training.

By age 34, Grandmaster Norris had established 32 schools and among his many students were Priscilla Presley, the Osmonds, and Steve McQueen. It was Steve McQueen who urged him to get into acting. His first role was in “The Wrecking Crew” in 1969. His next role in 1973 would put him on the road to stardom. It was the classic fight scene at the Colosseum in Rome opposite Bruce Lee in “Return of The Dragon”.

Call Us Or Come by Today

Classes For ALL Ages

From cubs to adults Escobar Training Grounds offers classes for every age and ability. Whether you are looking to seriously train for competition or just trying to stay fit, our schedule of classes is sure to fit your needs. Many of our adult classes run at the same time as our kids classes, so there's no need to schedule around the children. Check out our classes and come join the family!